Several rumours have been running around t'internet concerning a number of boiler manufacturers. In essence the rumour was that the customer information innocently passed on by the boiler installer was being sold-on by the manufacturer to large service companies who where then using that data to, effectively, nick the maintenance contracts.

Like many people I assumed the rumours had foundation, although I did think that as a business tactic it was a bit short term and ultimately a pretty poor idea. However, it seems that the original rumours had little or no basis in fact.

I struggle to see why the original "concerned Installer" would have initiated this rumour if he/she didn't have some fairly hard facts but, judging by a recent email I received, it would appear that it was all either a genuine mistake, a piece of malicious gossip, or it was all based on some flimsy evidence that fell apart the moment a heavy-weight corporate lawyer hoved into view.

Either way, Worcester Bosch have issued the following statement: 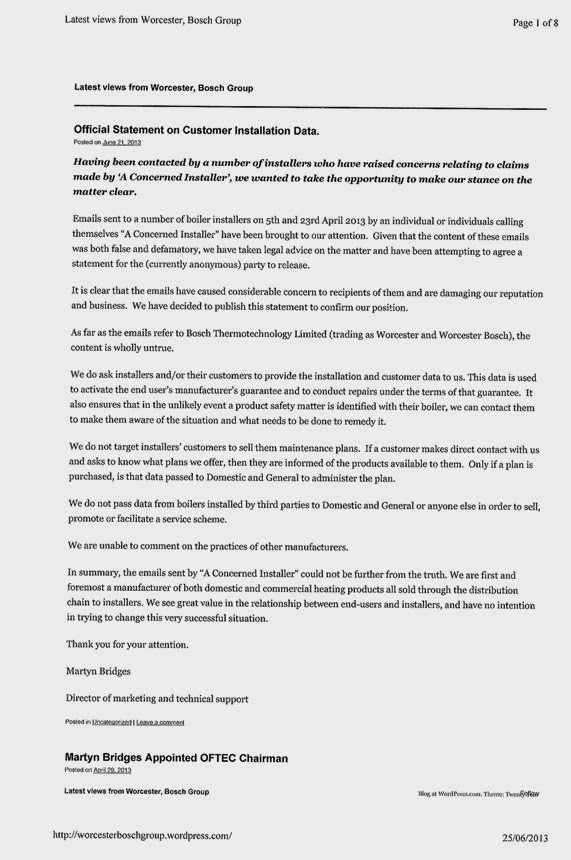 To be honest I'm quite relieved about this as we have still been fitting Worcester Boilers for the simple reason that customers have still been asking for them. Nice to know that we get to keep the service contract after all.

The original rumour also hinted that a number of other boiler manufacturers were trying the same thing. Hopefully this was also based on little or no actual fact.
Posted by Andy Blackwell at 13:46